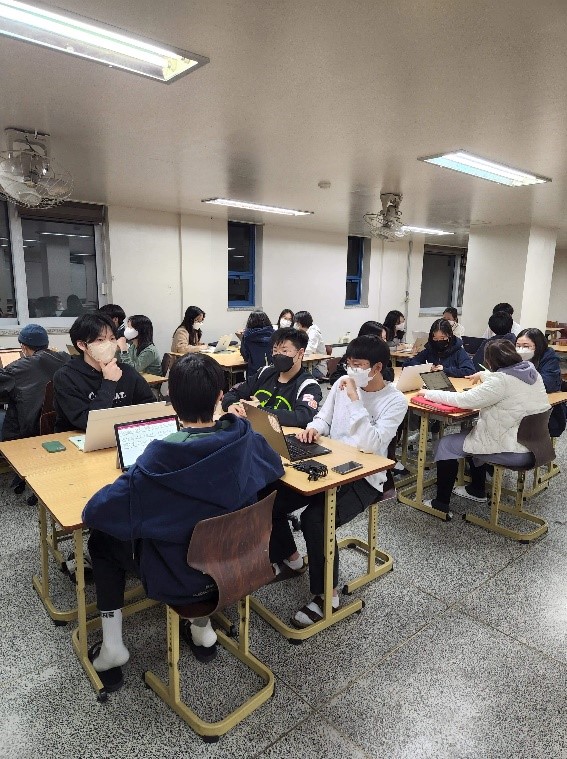 The above picture is of an orientation session for the KMLA Student Congress, where delegates work together to propose/enact new policies and amend existing ones.

The Student Congress is part of KMLA’s legislative council, consisting of student representatives of the legislative branch and student delegates. Legislative members are selected every semester during elections for the Student Council, their primary role being to advocate for the interests of the student body as w whole. As for student delegates, they are also elected each semester in their Homeroom (Advisor) Class and represent the interests of their specific class in the Student Congress.

There are three steps involved during Student Congress proceedings: a proposal is made, a discussion follows, and then a vote is held. Proposals are most commonly put forth by the student legislative representatives following in-depth discussions among themselves in the weeks leading up to a Student Congress gathering. Proposals must be related to a specific school policy, everything from Morning Exercise to curfew regulations. The Student Congress also carries out deliberations on budget drafts, which are submitted by departments and clubs in KMLA; hence, they are also introduced during the proposal stage.

After proposals and/or draft budgets are introduced, legislative representatives oversee discussions amongst all Congress members. Delegates can ask questions on any proposal, including why it should be approved. They also share their opinions on each proposal, either by agreeing or presenting their case on any aspects they feel should be modified.

Finally comes the voting stage. Votes are cast by the delegates present on whether each proposal should be approved or not (with three options: for/against/abstain). If approved by two-thirds, the proposal enters the phase of ‘class discussions.’ Delegates oversee discussions among their specific Homeroom Class peers, typically during the 8th period of Tuesday, where they are informed of the current proposals. They then hold and tally votes on each (for/against/abstain).

The Legislative Branch of KMLA is unique among schools in that it engages school policies from within the body. Members take responsibility for any/all current, new, amended or abolished policies. In addition, the branch extends deeply beyond its members, for final approval is based on student votes, class discussions and sessions with student delegates.

KMLA students know how crucial it is for representatives, delegates, and the students themselves to responsibly play their part in the legislative process, while valuing each and every opinion in doing so. Expressing one’s opinions, voting, and taking responsibility for the school is what builds KMLA students into global leaders.