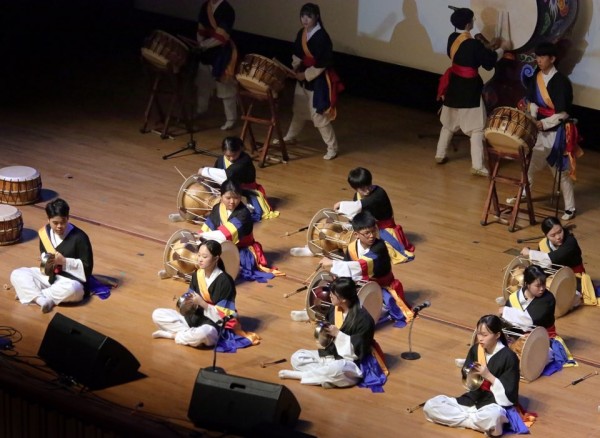 There are numerous music related clubs in KMLA, including two orchestras (Minjok Orchestra and KMLA Orchestra), Korean traditional performance clubs (Daechita and Samuchim), a musical club (The Scene), and various bands (PLZ, NAB, Synergy, and FITM). In addition to their performances on and off campus, each performs in the annual KMLA Music Concert held in Seoul.

The KMLA Music Concert (informally referred to as Minsaeum) is one of the largest and most important events which take place during the second semester. For this special day, students practice endlessly, often skipping lunch or dinner and even sacrificing their evening self-study periods. Unfortunately, because there are so many music clubs on campus, not all can participate in this significant and memorable event. So students do their best to pass the auditions overseen by our music teachers.

The concert is divided into two parts. The first includes performances by Daechita, the KMLA Orchestra, Minjok Orchestra, and others, while the second consists of performances by Samuchim, various bands, and choirs. To complement their excellent abilities, each club dresses in formal attire or Hanbok for their 10 minute performance.

Preparations for the KMLA Music Concert take place over many months, with virtually every detail overseen entirely by the students. We consider it one of the best events in KMLA. You will too after watching our videos uploaded on YouTube!